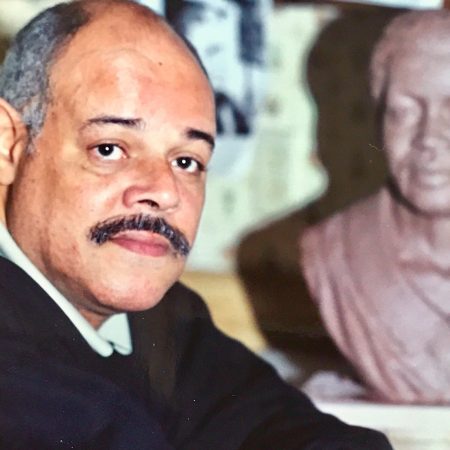 1947-2016
Norman A. Hughes accomplished artist, sculptor and designer recognized worldwide for his authentic depiction of African American figurines, was born in Augusta, Georgia. He produced four lines of figurine collections; Positive Image, Colors of Life, Sankofa and Shades of Africa. Norman was one of the first African American sculptors to create realistic, uniquely detailed, African American figurines. He was commissioned to create busts of notable historians in bronze, such as Lucy Craft Laney for the Lucy Craft Laney Museum of Black History. He received a proclamation from, Elihlu M. Harris, Mayor of the City of Oakland, Ca. proclaiming October 7, 1995 to be”Norman Hughes Day”. In Addition to his accomplishment as a sculptor, he was a gifted artist, painting portraits and still life in oil.
After serving in the United States Navy, Norman received his Bachelor of Arts degree from California State University at Los Angeles. He remained in Los Angeles where he worked for the Southern Pacific Railroad. Soon, he was offered an opportunity to freelance for a statuary business. While working for this business, he created a line called “Murphyville People.” They sold quite well, but when he created a little boy and girl of African American descent and called it Positive Image, it sold extremely well. The Positive Image line portrayed subjects in activities that represented real life events for African Americans that were rarely illustrated by White artists. The Positive Image line became his bridge from dream to a reality.
Norman started a small business called “The Craft House” with a staff of four. His main objective was to convey style, detail, composition and subject matter for each piece that expressed itself in a new and positive light. With that idea in mind, he created the “Buffalo Soldier” his best-selling figurine. He soon created two limited edition series within The Positive Image Collection called “Black Legends”and “Christmas Memories.” All together , there were thirty-four figurine designs from the original Positive Image Collection. The Positive Image Line was well received by the public.
Norman moved his growing business to Augusta, Georgia to be near his family. He established a factory and art gallery along Augusta’s Artists Row. An electrical fire destroyed the factory and he was not able to recover the business. His Positive Image Collection made from Hydro stone was retired. Soon thereafter, Norman was approached by Sarah’s Attic, to create a line of twelve designs, each limited to 5,797 pieces called, Colors of life. Many of the graceful characters in the multi-figure pieces wore flowing clothes and carried parasols. The series displayed dignity and love. They were made from Resin. Later, he signed on with United Treasures, where he continued to create new figurines lines, “Sankofa”, “Shades of Africa” and “Positive Image”series. ​
The Sankofa line was a completely different style with it’s sleek, modern smooth lines. Sankofa is one of the many Adinka symbols used by the Ashanti people of West Africa. Sankofa means “you must retrieve the knowledge of the past to prepare for the future”. Each Sankofa figurine displays the color contrast between dark skin color against cream colored gowns, embellished with patterns used by the Ashanti people. Hughes created another line with United Treasures called “Shades of Africa”. These designs conveyed pride, dignity and love, honoring the African American culture. Some of the Shades of Africa designs were influenced by the time he spent in West Africa, volunteering for Crossroads Africa. Although Positive Image was originally created by Hughes, some of his Positive Image designs were reproduced by United Treasures as a series, such as “Black Soldiers” series. Because of his working relationship with United Treasures, he traveled to China, where he gained an appreciation of Chinese culture.
Norman Hughes retired from commercial work in 2013; however, he continued perfecting two original sculptures he planned to have bronzed, “The Buffalo Soldier Bust” and “The Saturday Golfer”. He enjoyed interesting conversation, delicious food and was devoted to his wife, Helen, family and friends.